Steph has a really good bit of advice this month.

It applies primarily to those training for bodybuilding, but will benefit all of us.

I’m no pro, by far, but since I have been lifting for 18 years, a good amount of it done powerlifting and bodybuilding, I do get asked somewhat regularly if I train people, either online or in person.

(Note:  she doesn’t, but if you need programming you are on the right site! We do.)

This question always fills me with dread, not because I do not want to help people, but because I know that providing someone a program is merely a tiny portion of what makes for effective lifting.

I always would rather train in person, both programming the lifts AND watching them for execution, teaching and correcting as I go, because BY FAR the biggest thing I see holding people back in training for hypertrophy (and I would also argue for powerlifting) is POOR FORM.

What do I mean by poor form?

Basically, for the purposes of this article, poor form is lifts done incorrectly, not hitting the targeted muscle/muscles effectively……if at all.

Really bad form will yield a barbell curl that turns into a standing hyperextension, or a squat that looks like a good morning…..bench that becomes a decline because the ass is so high off the bench, etc.

Poor form really irks me because it makes hard work inefficient, ineffective, and often leads to injury.  I get it, I still don’t do everything right.

And when I started?

However, in the last 18 years I have learned a lot, and I can tell you the one thing I should have done from the start is learn proper form for the exercises I was doing.

I’ve been thinking on this one and I think bad form can easily be identified by looking for these two things:

1: Your Form Sucks Because You are Going Way too fast, Jack.

If the weights are moving fast, they are likely moving sloppy.  If you don’t have control of the movement because you are hauling and slinging a weight around at the speed of light, then your form is shit.  I’m sorry, it just is.  Also, your weight is likely too light.  You need at least a decent amount of stress on the muscle being worked (PROVIDED THAT YOU HAVE GOOD FORM) to feel it engaging, to get that loop of feedback from mind to muscle to understand that the targeted muscle is responding to your efforts.  If you are lifting like the Wacky Inflatable Guy from the local car lot, you have no fucking clue what your muscles are doing.

Do all your movements as tempo movements, with a 2-3 count extension and 2-3 count contraction.  Concentrate on the SQUEEZE at the top of the movement.  Feel the muscle contract, and stay there for a second, and get used to the feel of a muscle working.  Once you get an idea of how your body feels when it is actually working, then you can speed it back up A LITTLE.  But in hypertrophy, SPEED IS NOT THE GOAL….CONTRACTION OF THE MUSCLE UNDER PROPER WEIGHT IS.

(If you are powerlifting clearly speed work is used, but NOT at the sacrifice of proper form, so you still need to know how to do the damn movement correctly before you try to move it explosively).

Don’t be thinking about how many reps you can get in one set, or your next set, or how hot the guy across the room in the Westside hoodie is.  Focus on EACH DAMN REP, like the rep is your only goal of the day.  Just doing that alone will help slow you down.

Once your form is good, increase weight.

No matter how well you execute, I believe if you are working too light your body will tend to try to work too fast.  So add weight over time as needed to keep the reps challenging and focused, and not something your body wants to “swing”. 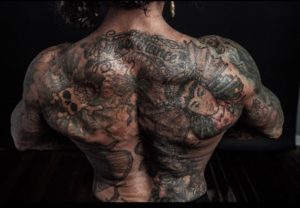 2: Your Form Sucks Because You Are Using muscles/parts not targeted for the goal of the movement

I see this happen most often if one is using TOO much weight, especially with poor form.

IF YOU ARE GOING TOO HEAVY, YOUR BODY WILL CHEAT TO COMPLETE THE MOVEMENT.

That means it is going to use whatever resources it has to complete the rep, and will likely incorporate a larger or stronger muscle than the one you are trying to train.

As a result, the muscle you are trying to work will end up taking a backseat to all the other damn muscles your body will drag in to finish the rep.

For example, in standing barbell bicep curls, your elbows should be static and not moving except as a hinge……they should not be traveling forward, or behind your back (would that be a drag curl? Likely not a good one, as your intent to start was a regular barbell curl) and your torso should be stable and also not moving.

The biceps are the working muscle here, meant to be ISOLATED.

If your barbell curls look like a standing-up hyperextension…..if you are heaving backwards with your back while throwing hips forward, elbows in motion forward at the same time, YOU ARE NOT CURLING. I don’t actually know what the fuck you are doing, except working on a back injury.

Any small muscle group exercise is prone to being done too heavy, but often biceps and rear delts are the main ones I see mangled.  In many cases I think it is an ego thing, and people feel weird picking up the 10’s or 15’s to do rear delt flys.

If you go to heavy on rear delt flys your body is going to turn it into a dumbbell row.

Another thing you will see reappear if you are going too heavy is weights swinging, but in this case your body is using a pendulum motion and inertia to cheat the reps.

If you cannot come to a full stop at bottom (and top) of movement, and need to “move it fast” to keep the reps going, you are likely working too heavy.

(This is not to say intentional “swings” or “pistons” are not useful, but these are more a variation or advanced technique and should not be occurring as a staple movement…..at least not until you learn the proper basic movement).

Honestly, I could really break this whole rant down into one succinct bit of advice….. if I had to tell you to do ONE THING in the gym to improve your chances at effective training and hypertrophy, it would be to CONTROL THE WHOLE REP.  Again, if you do this, you are likely going to have to slow it down, and focus, to achieve that goal, which will yield a better form, rep, set, and workout.

Maybe I am being an asshole.

I know many would say “it’s great that so-and-so is even IN the gym! Whatever they do once there is an improvement over nothing!”  I am going to argue this is a load of crapola……I know too many people who train a few weeks or months, then quit, because they see no progress.

Many are not seeing progress because they are not training properly or effectively.

It does not take that long to Youtube or Google search an exercise……or even just save vids on Instagram that show exercise execution to refer to when in the gym (and duh, save the ones that have pro’s doing them, not New Balance Tony with his fanny pack and lifting gloves).

NOTE: Your best bet: search the video library right on this site.

There really is no excuse to be crazily see-sawing through the trunk like a goober with 45’s on the EZ bar in a failed attempt at a bicep curl when you could check out a proper barbell curl online and put the damn 25’s on there and DO IT RIGHT. Ugh.

Here is some awesome Instagram of me training as described.