This month, Steph goes over one of the biggest misconceptions in the training world.

The last few months I have been on a gripe-fest bender of bone-picking with subjects likely more interesting to and applicable to women, i.e., last month’s guide to social media posting for women, and the month before that, women and PED use, so before I get labeled a (gasp) feminist (stone her!), I figure I’ll go back to bitching about gender-neutral subjects……like boobs.

Actually, I am going to discuss something frequently written about, and some would call cliché, but I still find relevant, especially for the powerlifter……

OVERTRAINING, OR, KNOCK THAT DUMB SHIT OFF, YOU SOON-TO-BE-CRIPPLE.

There is this mindset in powerlifting/weightlifting today that there is no such thing as overtraining, that if you are injured or “sore” you are either a whiny bitch that needs to suck it up, that you lack dedication and commitment to your cause, or that you are doing something stupid in training, as far as technique, but not that you are doing TOO MUCH with your technique.  If you don’t believe this, I can cite oodles of memes regarding this, ones that tell you if you wake up every morning hurting, it shows you are a powerlifter, that if you can’t bend over to tie your shoes due to back pain you are doing something right (you beastmode motherfucker), that pain is the mark of greatness, etc.

Now don’t get offended if you are “that guy”, because until the last 6 months of my life, I HAVE BEEN THAT GUY.

I know where you are coming from…..I used to count off my pains and injuries with pride, and have my laundry list of lamentations ready to go when I met a new powerlifter, because, by golly, right after stating weights and lifts we were gonna throw down in a who’s-who pissing contest of who was the most fucked up, each gaining more and more respect for the other as we commiserated on our scars and ailments.  Let’s face facts, it’s a bro-mating ritual among lots of us.

But, here’s the thing……if you constantly train in pain, constantly injured, constantly sore, tired, run down…..trust me, you are not optimizing your training or putting up the best numbers you can.   I’ve been counseled for years by friends and coaches as to the excessive volume, percentages, reps, and sets I have done, and how it was way too much.

A close friend once told me that I may not ever be the best powerlifter, but I was the best ever at working out.

I spent 5 years powerlifting without a break, and I did sets upon sets, constantly running peaking programs, with stupid amounts of volume on the big 3 and secondary assistance moves, followed by a full range of bodybuilding movements, all in one session.

As a result, I quickly exacerbated existing issues, and created new ones that became chronic.

I would ice arms between bench sets to get through a day.

I stopped doing biceps altogether because I could barely grip the dumbells and it hurt so much it interfered with benching.

I could not do pullups. I had constant back pain, limped around all the time, ate ibuprofen like candy, and was generally a run-down piece of hammered shit.

In short, I was doing WAY TOO MUCH. 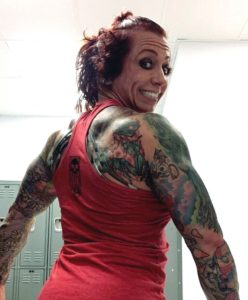 After awhile I thought all these injuries were permanent, the scars of the trade, so just kept training through and around them as best I could to finish my sets and reps.

Not surprisingly, it all got worse.

So once in awhile I would take a week off to “rest”, but it did little good.

So eventually I didn’t bother with that either.

In the months before my last meet in October, a good friend told me to take a year off powerlifting, at least.  He’d been watching me grind myself up, telling me to stop, for years, and finally kind of just let me spin out on my own because I’m a stubborn ass.  I was terrified by his suggestion…..I figured I would lose so much strength, have to work years to regain it, lose so much ground.

However, in the end, for those and other reasons, I decided to take a break.

Turns out you can overtrain your mind too.

I needed a rest from the whole caboodle, from the drama in the sport, to the max effort training, from deadlifting every week.

I needed a rest before my spine shot out my back and I needed to hire The Predator to rip me out a new one.  Basically, I was burned out, body and mind.  So I stepped back from powerlifting, telling myself I would take at least a year off to seek new goals, get my head right, and repair.

Within 3-4 months my severe acute-on-chronic bilateral forearm tendonitis was better…..so much better it barely bothers me.

I can sleep, I can do biceps, I can function without pain.

My back pain has mostly receded.

My plantar faciitis is much improved.

My delt issues are feeling much better, I can hold a hair dryer up for longer than 2 minutes.

You get the picture.

Am I saying you need a year off?

I am saying if I would have trained SMARTER rather than HARDER for 5 years I MAY NOT HAVE NEEDED THE BREAK AT ALL.

Even more amazing: my strength has gone NOWHERE.

I’m hitting for reps the same numbers or better, than I was when doing powerlifting training.

I still bench, squat and deadlift, but with more variations, more reps, less sets, and less of a rigid adherence to what one is “supposed” to do when powerlifting.

Are my maxes going to be the same?

But they are close…..and likely fairly easily recoverable.

Additionally, who knows what I might be able to do with better mobility, less pain, greater ROM without pain, etc.  My squats and bench look and feel much better.  I still hate fucking deadlifts, but I suck at them, so I’m ok with that.

And I am getting a great break mentally from the grueling drain of competing, training to compete, and worrying about my numbers and performance. 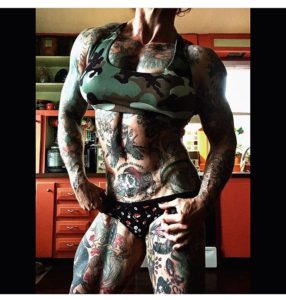 Basically, I just went on and on to tell you that I have learned; overtraining DOES EXIST.

It’s ok to sometimes be overtrained, for short periods; it is ok sometimes to have some chronic pain, and injuries will happen.

But if you are training ALWAYS hurt, ALWAYS in pain, ALWAYS exhausted and burned out, IT MAY BE TIME TO CHILL A BIT.

Because, trust me, strength does not “disappear” that fast, and it is recoverable…..and you might just perform way better AFTER a rest, instead of doggedly beating your head on a wall to train THROUGH the pain.

Just my two cents, but I’m no “lion” in “beastmode” tearing up the gym and “killing it” no matter what.

At this time in my lifting career I want LONGEVITY….and recognizing overtraining and stopping it is part of that goal.