Note: Cutting is a bodybuilding term for dieting down to ridiculously low bodyfat levels.

This is part two of an as-yet-undetermined-length series on everything that had to do with my first physique show, which I did June 9th. I covered general cutting/diet for the show last month, and this month I am going to address the ways in which training changes as you decrease caloric intake heading into a show.

Now this is no regular “diet” to just shave off a few unwanted pounds, instead, this is a full-on assault on your body fat, with an attempt to get well below 10% body fat to hit the stage. In all honesty, most goals I have seen are to hit 4%-6% body fat by show. Humans are not meant to operate at these figures, in my humble opinion, and it is definitely a seriously physically and mentally challenging undertaking to get there.

So…….how does training change in an “extreme” cut?

First, as your diet changes, with carbs and fat whittled down over time, you will also start cardio, which increases over time.

I started my diet about 20 weeks out, and the cardio started at about 15-20 mins 3-4 days a week. In a few weeks, as calories slightly dropped, cardio was upped to 20 minutes 5 days a week.

In another few weeks or so, I was doing 30 minutes of cardio daily. 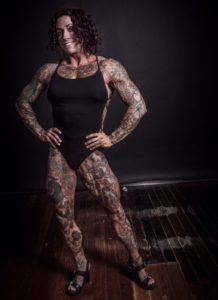 As the months passed, I gradually worked up to an awful and all-time high of cardio 1-1.5 hrs a day, EVERY FLIPPIN’ DAY.

To do this I had to split cardio into two sessions a day, so I generally did 30 minutes every am on the stair mill at the gym at 5am, then would come home from work and use my treadmill for 30-45 minutes. My goal heart rate at start was 120-130 bpm, but by end it was more like “get over 130 and die” rate.

My lifting changed a lot too.

I did a lot more isolating, and towards the end I did a lot less heavy compound work.

Also, your body gets exhausted, depleted, and very dry, leaving one prone to injuries if you try to squat a max for 6 reps, do heavy pulls, or any other such movement.

In other words, you are not trying to BUILD muscle, you are training to just KEEP as much of what you have as you can. 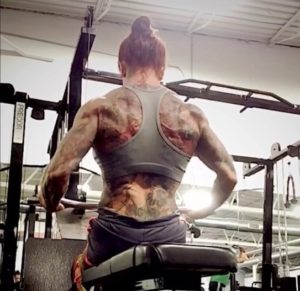 I really struggled with knowing I was not accomplishing anything, because in MY mind, accomplishment means growing and adding muscle mass.

That’s an error on my part, I was accomplishing my goals of leaning out for a show, but still……knowing you are just in there to try to salvage what you have makes finding motivation hard.

And: if you think you will be able to stay at a weight you USED to do 15’s for while bulked, you’re delusional. Your weights will be way down, and you cannot be fixated on the amount of pounds you are handling. If you are, you will be a depressed wreck of a guilty, weak-feeling slob.

The goal now is a focus on the movement, and keeping good form and getting a good pump AT WHATEVER WEIGHT YOU NEED, for the number of reps you need to hit. In truth, this is EXACTLY the same goal one should have for ALL training, bulked or lean/dry.

Leave your ego at the door, and DO THE DAMN WORK. 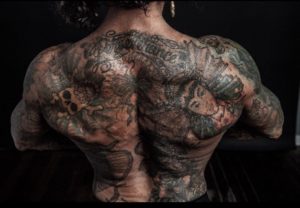 Some may say “15 rep sets? And only isolating?

To you people I give my double middle fingers of death, because I assure you NONE of this was easy.

I powerlifted competitively for 6 years, and mentally and physically (during cutting) this is by far the hardest shit I have ever had to do. Lower weights does NOT mean easier…..if it is easier, you aren’t working hard enough.

That’s it for this month. It’s so succinct I feel like I should start telling jokes or tap dancing to draw it out. Maybe for once you poor saps avoided having to read me going on and on ad nauseam. Just wait until I get to my mental health during this cut……THAT fracas will be a fucking ENCYCLOPEDIA of shit.