Skip to content
You are here:Home-Featured, Women’s Fitness-The Kraken Files May 2018

This month I have decided to diverge a bit from the usual training and/or diet focused columns I tend to write, and instead write something a bit more philosophical, more a discussion piece on rectifying my feminism with engaging in aesthetic-focused lifting which will result in me wearing a dreaded sparkle bikini, on a stage, tanned to the hilt, hair did, being judged on both my “femininity” as well as my muscularity, by a panel of judges who are essentially judging me solely on appearance and my ability to gracefully adhere to a set of random rules. 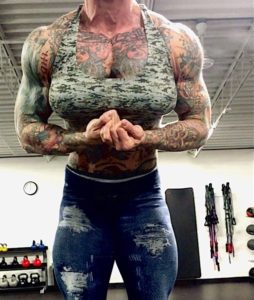 These days stating you are a feminist has somehow been made equivalent with being some raging man-hating “libertard” grinding an axe that some feel has no need for sharpening.
But bear with me guys, mostly because…..this is my damn column and I can write what I want, and if you don’t want to read it you can simply close the screen on your phone.
So, without further ado, this month I bring you……

The Pursuit of Aesthetics and Feminism…..(and I believe the two can co-exist)

Many feminists have issues with women being judged based on appearance, as it has traditionally been the MAIN way in which a woman’s value is judged.

How attractive she is
How much she conforms to a confusing, culturally-based and often contradictory set of ideals
How “fuckable” she looks…..

These are often the main yardsticks by which a woman’s worth is judged.

If you think this is untrue, think about the TYPICAL representations of women you see in advertising, on TV, in magazines, etc.

And yes, I know these forums are all “selling” something, but not only are they pushing a product, but in the context of the woman as sex object the woman HERSELF becomes the product as well.
I even saw it in powerlifting…the smaller, “cuter” women were more likely to have sponsorships and acclaim.

Sure, they had great totals, and were strong as fuck, but plenty of the “big girls” were as well, but just did not tend to get the sponsorship opportunities of the lighter classes. 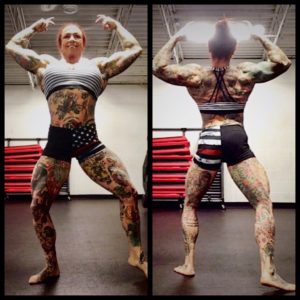 And it happens in aesthetic competition as well……figure women are generally seen as “feminine” and “hot” to the masses……and physique too, but to a lesser degree.

If you want to see a group of women largely misunderstood, maligned, harassed and hated……look no farther than female bodybuilders.

They are the farthest from what is “ideal” physically in western culture, so are unfairly vilified by many, including the same women who preach body tolerance and self-love/feminism.

And let me state here that I unequivocally agree….a woman should NOT be judged solely on her appearance or conformity to a “beauty ideal” that is at the same time vague as it is overly specific, ever-changing, and essentially impossible to attain.

So why then am I ok with being a physique/aesthetic competitor?

Why am I doing a show?

Is this not encouraging the idea that women should be seen as objects, as physical beings only, without substance, as “parts” rather than as whole women?

I don’t think so.

I do not have an issue with aesthetic competitions because I CHOOSE to enter into this realm, with these rules, as silly as they might be.

I know, going in, what I am in for, and on what I am being judged.

It is a SMALL SPHERE of existence, a PART of my life, one that I can step in and out of as easily as I step on and off the stage.

Yes, I am in some ways striving to meet that amorphous, impossible cultural ideal, but it is in a limited setting with defined boundaries, and a beginning and an end.

In other words, I can leave the stage and should be able to expect those arbitrary rules to STOP (although they often do not).

In addition, the very act itself of lifting, and striving to create muscle mass that the average female does not carry is, in itself, already an act of rebellion.

So, although I may be mimicking the attempt to be judged as “attractive” that occurs in regular society, it turns the whole endeavor on its head because I am engaging in what is still a fringe-accepted female activity. Sure, women go to the gym, but not many of us are trying to get as big as we can, or trying to break the mold of what women are told they SHOULD look like, what IS attractive, and in the process do it OUR WAY.

So no, I do not think putting on a tiny, barely-ass-covering glitter bikini and twirling around on a stage throwing up my “guns” in any way flies in the face of feminism, or MY feminism. After all, feminism is advocating for women to be able to live, without unfair societal judgment or condemnation, whatever life they WANT to live…..and that includes at times doing things that have the appearance of conformity, like lifting for aesthetics.

by: Stephanie Tomlinson May 2018