Skip to content
You are here:Home-Women’s Fitness-The Kraken Files: Goal Based Training

The Kraken Files: Goal Based Training

The funny thing is that besides the fact that this is a really good article, I discussed many of the same topics recently and agree 100% much of this.

Another coach and I were talking about a semi famous Internet coach who bashes lots of people and claims that lifters can only do the classic lifts while saying further that variations and accommodating resistance do not work. He is simply showing is ignorance but people believe this bullshit.

Too often online I see people making reference to the absurdity of using certain equipment (omg, how dare anyone call themselves an athlete and use a Smith machine, or post leg press vids…..resistance bands for deadlifts?!
How silly!

Practice how you compete, only competition pulls for me!), or even certain training methodologies (I only use so and so method, all other methods are useless, my way is the best way, join my cult!!) and me, being the recalcitrant asshole that I am, decided to use my considerable influence in the sport (nonexistent) and vast wisdom (questionable, I once got my hair stuck in my car window), and let’s not forget my enormous experience (ok, none can argue here, I am older than dirt) to weigh in with this month’s column:

GOAL BASED TRAINING, OR…..USE THE FUCKING TOOL TO COMPLETE THE JOB, YOU TOOL.

I wasn’t sure what I wanted to discuss this month, I was thinking on it, and was like “oh fuck am I actually out of anything to say?!?!?
How did that happen?!?!”

Then I started talking to a friend in Florida about keyboard warriors and self-appointed “cool kids” and fickle-masses’ fluctuating areas of criticism of others (often based on little more than what someone else said was “cool” or “not cool” that month) and realized that I am often annoyed and pissed off about the subject of “taboo” training equipment, methods, machines, etc.

Celine and I were discussing benching. I come from a long background in the gym, 16 years total, the first 11 weightlifting/bodybuilding and the last 5 some combination of that and powerlifting.

As a powerlifter who is currently bodybuilding, I still arch to bench, but I rarely “competition” bench, instead cycling close grip, wide grip, incline, partial range, etc. to accommodate MY NEEDS, which currently are hypertrophy.

Celine is bodybuilding, and flat-back benches.
Both work, for our goals.

But when I post my vids, I get slammed at times for arching (that will hurt your back, that is “cheating”), and when she posts hers she ALSO gets criticism (you should be arching, that’s improper form, you cannot maximize weight in that position).

A BENCH ARCH EXISTS PRIMARILY TO ALLOW THE MAX WEIGHT LIFTED BY UTILIZING THE SHORTEST ROM POSSIBLE.
The goal: max single rep.
The techinique: arch to reduce ROM.
For those who do not powerlift, flat back benching serves a different goal:
INCREASING THE ROM TO MORE FULLY WORK THE PECS.
The goal: hypertrophy.
The technique: full ROM.

Of course, I still arch, even though I am bodybuilding (that is more an ingrained habit); but, the point is, there are different ways to bench, depending on goal, and one is not “right” and the other “wrong”.

Your training methods, the tools you use, all should be able to be fluid and changeable depending on YOUR GOAL. 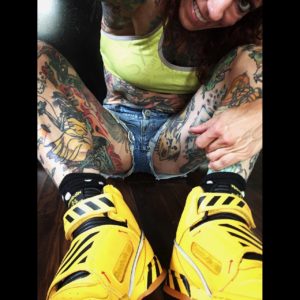 The leg press. I have hardly seen a so-maligned movement on internet sites/pages. We have all seen the jokes about “who gives a fuck about your leg press” with the accompanying statement or picture of some guy squatting 4,000,000 kilos.

The widely NOT discussed fact about the leg press is that it is A FUCKING STAPLE IN MOST POWERLIFTING PROGRAMS.

Ok, granted, we are not loading it up like dingleberries for a max single, which serves little purpose in our powerlifting training, but we USE THE DAMN THING, AND A LOT.
However, the appearance to others, and newbies, is that it is a taboo piece of equipment that should not be lauded, utilized, or attempted to improve with.

Let’s take the Smith machine, which I think we can all agree is the most universally hated piece of gym equipment there is, and thus a favorite of mine…..it’s versatile as fuck.
Do I recommend it to learn or train a powerlifting squat?
HELL NO, assholes.

But it is exemplary for developing/isolating legs and for hypertrophy work.

If you don’t believe me, go try to put your max squat weight on a smith and squat it.
It will suck.

The Smith forces you to 100% utilize those legs, largely takes out rebound; it just sucks like a motherfucker to go to failure on.

Again, the point is WHAT THE FUCK IS YOUR GOAL?
If you are powerlifting in a hypertrophy phase, you can use the damn thing.
If you are peaking for a meet, probably not.
And if you are bodybuilding, you would be an idiot not to work it in with barbell squats for mass gain. Plus you can do all kinds of other nifty shit on it…..OHP, controlled-rep rows, single arm rows, even bicep curls (imagine how many heads explode when someone CURLS with a SMITH MACHINE OMGGGG, I gotta do it).

Camber bar for squats, some won’t use anything but a straight bar to train…..I challenge you to load up a camber and try that squat again.
You’ll probably almost die.
That bar makes you utilize your core, and learn to stay tight, OR DIE….a very useful tool for those of us that are overcooked-spaghetti squatters.
Bands on deadlift…..got a bad lockout?

Those can help, even if you DON’T follow the Westside training method. I don’t care what method you train in, what equipment you get made fun of for using, how many internet “pro’s and bro’s” give you shit:

IF YOU FAIL TO USE ANY AND ALL MEANS AVAILABLE TO YOU, that work FOR YOU, to reach YOUR GOAL, you’re a bigger idiot than the guy with the pencil legs saying you can only grow legs with barbell squats. FUCKING USE WHAT WORKS, FOR THE GOAL YOU HAVE.

Being narrowminded and regurgitating what the masses say is only going to hobble your progress; at some point you need to think for yourself.

To again reiterate my point, let’s talk about MY ASS. I know if any of you follow me on Instagram you’ve seen more of it than you could ever want to.
I am 44. For 42 years of my life, I HAD NO ASS. I used to truly think it was genetic.
I spent 5 years powerlifting, squatting, the very thing that is supposed to grow and ass, and still HAD NO ASS.
I got made fun of nonstop….what decent female powerlifter has no ass?!!?!?
It wasn’t until I started ISOLATING my ass (which I had never done), with things like cable and resistance band kickbacks, glute bridges various ways, stiff-legged rep work, and sumo deadlifts and variations, that I started to grow.

It was amazing; I was shocked.

My ass NEVER got sore before I started isolating…..and the weird thing is, the isolation and the sumo pulls MADE ME activate my ass, which somehow I was NOT doing in all that squatting. As I learned to activate it, how it felt, how to sequence my movements, etc., IT TRANSFERRED OVER TO MY SQUAT.
It’s like I had to wake the muscle up, teach it to fire. Isolation did that, not just endless barbell squatting.

Is this going to be true for everyone?
No.

But if I had heeded all the “bikini models do kickback” jokes I saw online, I would have never grown my ass, and never learned to activate it to squat. A simple kickback, a simple glute bridge, CHANGED MY SQUAT. You better fucking believe I am gonna do kickbacks. I’ll be doing them until my ass is as big as my fucking mouth, which apparently today is huge, considering this long-rant of a book I just wrote, to basically say one thing:

USE WHATEVER THE FUCK YOU NEED TO ACHIEVE YOUR GOAL. PERIOD.

And if anyone has something to say about it, I have this nifty kickback cable you can strangle his/her ignorant ass with. 😀