Some of you may have been watching as I prepped with a 4-5 month mild cut, 6 month bulk, then a 4-5 month cut into my first physique show.

In fact, it was my first foray into aesthetic competition EVER, as for years I just lifted, then spent 5 years being a fluffy moose of a powerlifter. I decided to try out aesthetic competition because I need new goals to stay motivated, because I like to learn new things, and because my train wreck of a geriatric body was falling the fuck apart training heavy, nonstop, for years.

Anyway, I figured that I would share with you a lot of what I experienced and learned along the way, as much of it was new, amazing, not what I expected (and sometimes distressing and hilarious). I’m likely to ramble a bit and mix subjects, but I am going to try to group the next few columns into some overarching order…..

I’ll be discussing the bulk/cut (i.e diet), training and how it changes over course of prep, the actual week of the show and the craziness that ensues, then the actual day of the show itself (also with its own craziness). Also, at some point I am going to discuss in some depth the very real behavioral and mental issues that come with a strict cut (as to get to below 6-8% body fat you pretty much literally starve while doing cardio ‘til you want to die), ESPECIALLY the issues faced by those with a history of disordered eating and/or anxiety (hi that’s me!!).

I have a history of disordered eating,

body image issues, etc., so it hit me in unexpected and confounding ways, and it made me wonder if mentally I was the best candidate to do this type of sport. However, with some research I realized that what I went through was SURPRISINGLY NORMAL for athletes prepping for a show, although I was at the extreme end of the spectrum (but more on that later).

Ok now that that “syllabus” for the next few months’ columns has been explored, let’s get started with the first topic: diet, and more specifically, both the bulk, and cut, into a show.
I started this whole foray into the sparkle-bikini world starting as a 143lb powerlifter. I was fairly solid, but definitely fluffy as well, and although I have meal-prepped for years, I was not 100% clean by far, prone to an extra few handfuls of chips, maybe some extra cheese on my entrée, grabbing candy at work, and a definite 1-2-3x a week HUUUUUUGE binge cheat meal or dessert party.

Anyway, first I did a mild cut to get off some fat and see what was under the fluff, so I could do a proper CLEAN bulk, with the goal to add mostly muscle mass and not much fat, but to keep my weight in a common-sense range for a 43 year old 5’1’ female. After all, if I would have bulked from 143lb, where would that go!??! 5’1” and 165lbs would not be optimal as I would then have to cut a ton of weight for a show, a lot of it fat.

So, the first mild cut was just a process of first finding my maintenance calories, over a few weeks, to stay at 143lbs.

Then we (I had a diet coach for all this) started slowly shaving away calories. By that I mean dropping maybe 1-1.5 servings carbs, decreasing fat by 6-10g, etc, a day for a week or two.

We would see what happened as we went along, and adjust every few weeks. If I was losing steadily, we would proceed at same numbers another week.

If I stalled, we would again shave some carbs and fat. My protein would also slowly drop, but not at near the rate of the other two, and it tended to stay higher. I also added in cardio, but nothing like the cardio to cut into a show. We are talking like 15-20 minutes 3-4x a week, with the time increasing over time, to maybe 25-30mins at most during this cut.

Also, as my carbs and fat started dropping lower and lower, my protein then INCREASED slightly, in order to help retain muscle during cut. With this method in 4-5 months I went from eating maybe 2500cals a day with cheat meals, to 1350 cals a day clean, and hit 129 at bottom of this cut before I bulked.

Bulking did the same thing, but slowly in reverse.

So I added back in carbs and protein and fat slowly over about 6 months, while also ramping up the intensity and weights in my training. Same exact process, just watching weekly as carbs and fat and protein were added cautiously, just a steady increase. I ended up weighing 143lbs at the TOP of the bulk, but this 143lbs was much more muscle and less fat than where I started originally.
Also, I got to drop the cardio, to my delight.

So then came the 5 month cut into the show. It was pretty much what I had done before for the first 3 months. Slow, steady drop in fats and carbs over time…..but THIS time the cardio was way more involved. It started the same, but over time became daily, then 2x a day, for longer and longer durations.

Also, about 6-8 weeks out my calories dropped even lower than last cut, and I was eating 50g carbs a day, around 24g fat or less, and like 160g protein (approx.). I would have carb “refeeds” every certain number of days……every 5 days, then every 6, then every 7, you get the idea. Eventually, I was going up to 2-3 weeks without refeeds. I ended up hitting 117.8lbs at my lowest doing this, which put me under 8% body fat and not at a pro level, but pretty damn lean for my first show.

So, I managed to run on and on, as usual, but wanted to emphasize this: it’s basically the same method that everyone should use to diet, but taken to something of an “extreme”.
Therefore, calories in > calories out to build, and calories out > calories in to cut.

Also, it was done SLOWLY and over time.

To gain muscle you need to add a measured and cautious surplus over time, not just start dumping in food left and right.

The body can only build quality mass so fast, so if you dump in calories, even clean ones, the excess that cannot be made into muscle will become fat. The reverse of this is that if you CUT calories too far too fast, the body will cannibalize its muscle as well as eating fat. 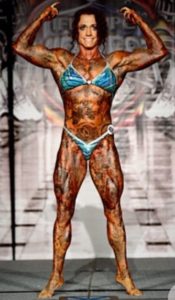 So moderation, close watching of both the scale and how one looks, are key. This is also why asking an athlete near show “what’s your diet….can I have it? I want to look like you” ABSOLUTELY DOES NOT WORK. No way am I gonna tell someone who doesn’t (or even does) lift to suddenly start eating 1200cals a day. You cannot apply ANY diet an athlete is on suddenly to another person. The METHOD may be the same, but the actual macros can be VASTLY different.

So that’s it…..diet basics, with intent to do a show, and how to do it right. Holy fuck, was that boring or what?!?!? Sorry guys. I promise that when I talk about getting my hoo-ha spray tanned it will get WAY more interesting. 😀